I'm trying to integreate BME680 with Atmega644p, but unable to add libalgobsec.a in my project.

See below screenshot of my linker settings.

It'd be great if someone can help me out.

Here is a list of devices and compilers that have been supported.  You could try it with the compiler in the list.

Thank you for your responce, and I see what I was doing wrong.

So I tried creating a new project of in Mircorchip Studio but couldn't clearly see the AVRGCC in below list. 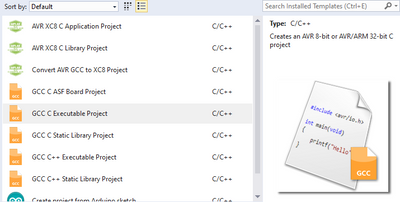 So I chose GCC C Executeable Project (is it AVR GCC or do i need to select any other?) and created a simple example project.

Loaded the .a library in example project and still got following error.

So what am I doing wrong in this?

So as the issue hasn't resolved yet so I was exploring different solutions, and when i loaded example project in Microchip studio (as shown below)

and loaded .a static library provided by Bosch, i noticed something strange. 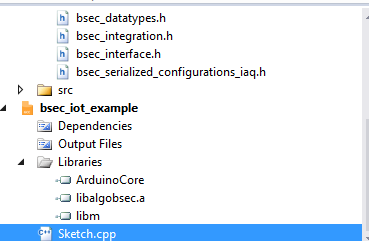 See, the static library (ArduinoCore.a) created by Microchip is working fine and showing withouth extension. But the library libalgobsec.a is being shown with its extension name (.a at end). Now this was strange, and it brought a thought to my mind that sometimes static libraries can be IDE specific (right?).

So is there any chance that libalgobsec.a provided by Bosch is IDE specific and that's wht it shows as incompatible in Microchip Stuido?

Best way to find answer would be to load the project in some IDE which was used by Bosch to create this library. So can you provide me IDE regarding inofrmatoion?

We know little about how to use Microchip Studio. You could try it with AVRStudio IDE for AVR-8bit MCU.